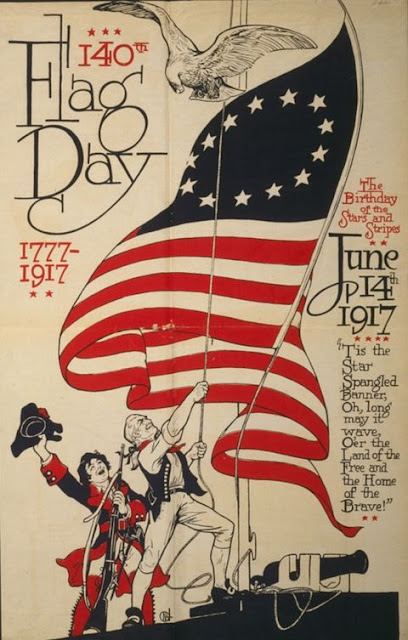 WHAT IS FLAG DAY?
Flag Day is a celebration of the American flag that occurs each year on the anniversary of the flag’s official adoption, June 14.

What we know fondly as the “Stars and Stripes” was adopted by the Continental Congress as the official American flag on June 14, 1777, in the midst of the Revolutionary War. Colonial troops fought under many different flags with various symbols and slogans: rattlesnakes, pine trees, and eagles; “Don’t Tread on Me,” “Liberty or Death,” and “Conquer or Die,” to name a few.

The first official national flag had 13 white stars on a blue field and 13 alternating red and white stripes—both representing the 13 original colonies. Today, there are 50 stars, one for each state in the Union, but the 13 stripes remain.

Flag Day was first celebrated in 1877—on the flag’s 100th birthday—and persists today. On Flag Day, many towns and cities hold parades and events to celebrate the flag, and the colors are to be flown at all government buildings. Flag Day is not an official federal holiday, but its observance is traditionally proclaimed each year by the President of the United States.

Who Made the First American Flag?


Although many people believe that Betsy Ross designed and sewed the first flag, there is no true proof of that. However, records do indicate that she made ensigns and pennants for the Philadelphia Navy during the war.

Posted by AMRAP Fitness at 6:51 AM