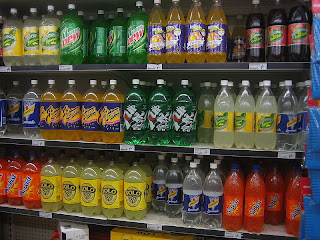 Cities face budget crises, and the nation faces an obesity epidemic. So it's hardly surprising when government officials want to fight obesity by raising taxes, especially by taxing sugar-sweetened beverages -- a so-called "soda tax." Many public health advocates have thrown their support to what seems to be a political two-fer: more city revenues and less obesity.
If only science wouldn't get in the way. But it does. We got a whiff of this when a bunch of New York City government emails were released through the state's Freedom of Information Law a few weeks ago. The city's Health Commissioner wanted to post a video on YouTube saying that drinking one sugar-sweetened beverage a day -- shown in the video as a sort of fat sludge rather than an ordinary drink -- would cause a teenager to gain 10 or 15 pounds in a year. This would be a nice statistic in support of a soda tax. But even the health department's own nutrition experts and their outside academic consultant balked. They pointed out that the calories in one soda per day could easily fail to generate anything like this weight gain, because overall diet and exercise are hugely important and some lucky souls (good genes!) can ingest extra calories with impunity, anyway.

There is no getting around the basic truth that what counts for obesity are total calories along with energy expenditure through exercise. It turns out that there is practically no reliable scientific support for using soda taxes to fight obesity. That's clear from the research literature. It is easy to cite simultaneous upward trends in body weight and soda consumption, but the connection between the two is far from established. Instead of being a cause, extra soda consumption may be a result of ingesting more calories for reasons that have nothing to do with any particular beverage. Moreover, if a penny per ounce tax pushes soda consumption down, there's no guarantee that calories go down. That's partly because people tend to compensate, maybe by drinking an extra high-calorie fruit drink or two. This compensation phenomenon has cropped up over and over again when scholars track prices, taxes and consumption patterns through time. Even if a tax did cut out a 12-ounce sugar-sweetened beverage every day, the impact on total calories could be trivial.

In health policy, we're always running into situations where research generates mixed results. The usual recourse is to run randomized controlled experiments, which allow us to be reasonably sure of what causes what. This is standard practice in assessing pharmaceuticals. A correlation between drugs and disease, or even between vitamins and disease, is all very nice, but experience has shown that correlations often turn out to be spurious when we get results from rigorous clinical trials.

In the case of diet and obesity, research based on correlations has provided contradictory evidence on the impact of soda prices or taxes; the most rigorous statistical studies tend to find no impact at all. Most important, there's also evidence from a half dozen or so randomized field experiments in which information, access, or prices were controlled in order to reduce soda consumption while researchers also measured the impact on weight gain. What happened? First, consumption of the targeted beverage was sometimes reduced, just as intended. Second, compensation among various calorie sources was common as subjects adjusted to the new choices they faced. And third, in each experiment the impact on weight gain was either trivial or temporary, disappearing as compensation and other forces did their work. Conducted in the past half dozen years, with subjects ranging from pre-teens to teens and adults, field experiments that are our best science have cast serious doubt on the use of soda taxes to fight obesity.
The soda tax battle in New York City and elsewhere is instructive for the nation. Obesity has defied decades of drug development, public exhortation and information campaigns such as restaurant menu calorie labeling. It is my belief that the rush to tax is an impulse to generate new revenues rather than a creative application of nutrition science to public health. I believe we should take a close look at what has actually been learned from experience.
John E. Calfee is a Resident Scholar at the American Enterprise Institute, and the opinions expressed herein, while exclusively those of the author, are based partly on research funded by the beverage industry.
Posted by AMRAP Fitness at 9:14 AM