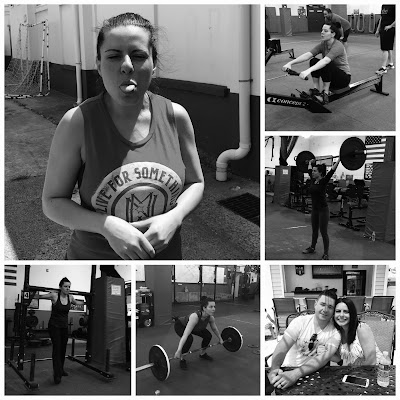 Where do I begin..

growing up in an Italian family I loved food, pasta every sunday, ice cream during the weekdays, wasn't really going to the gym at the time until I jumped on the scale and nearly fell over. My best friend said there was a new gym in Pearl River opening so I decided to sign up. Started taking classes like spinning, then some classes with weight training, yet I still wasn't feeling strong or confident.

Then I started watching some videos on YouTube with CrossFit, my husband which was my boyfriend at the time said I should try it out, I told him he was out of his mind. Luckily I found Ray & AMRAP Fitness handing out flyers at vision, decided why not? Walking in for my first class was skeptical at first but the environment was so positive and motivating that the fear went away. I learned how to eat better...for the most part haha, challenge myself to lift heavier weight and have confidence in myself. I have never met a coach with more patience (when I'm not driving him crazy) then Ray. 3 years and still going strong probably the best lifestyle change I ever made!

I love AMRAP Fitness and the community and would't trade it for anything.

Justine
Posted by AMRAP Fitness at 4:26 AM No comments: 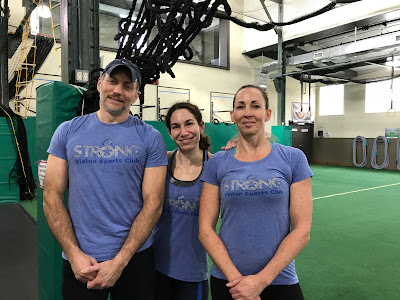 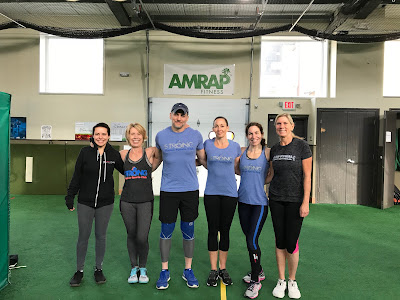 Posted by AMRAP Fitness at 3:31 AM No comments: 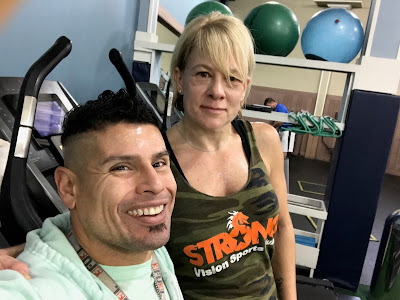 Posted by AMRAP Fitness at 4:09 AM No comments: 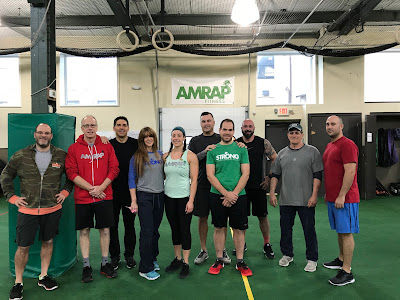 Warm up
Pass ball
With ball/MB

Object it to knock down opponents pin for a point

*Once position of ball you can only take two steps

Object it to knock down opponents pin for a point

*Once position of ball you can only take two steps

Posted by AMRAP Fitness at 3:29 AM No comments:

A Unique Form of Therapy: The Physical and Mental Benefits of Cleaning 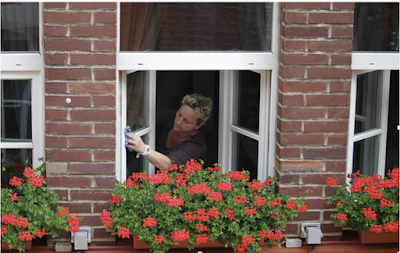 A Unique Form of Therapy: The Physical and Mental Benefits of Cleaning

By: Alice Robertson
Cleaning is a remarkable form of therapy. Transforming one’s home from a cluttered, disheveled, dusty mess into a well-ordered, clean-smelling space confers a strong feeling of accomplishment and a sense of relief and ease that’s difficult to describe and harder to equal. It confers powerful mental and emotional benefits, as well as the satisfaction and reassurance that you can take control of circumstances and begin a healthier lifestyle. After a thorough cleaning, your home looks great and feels fresh — and so do you.
Mental Benefits
Studies have shown that there is a definite connection between clutter and stress; a cluttered living space can leave you feeling as though your life is out of control, which generates an anxious feeling of incompletion that makes it harder to get through other daily tasks. And it can make other problems — even insignificant ones — seem much bigger than they really are. Decluttering helps alleviate that stress by establishing a space in which you can relax.
There’s also a strong sense of renewal. Once a dirty house has been cleaned you’re on the verge of a fresh start, which leaves you feeling anything is possible and that you can alter other problems and begin anew. Most importantly, it’s a basis for altering the state of your mental health and adding healthy personal habits to your daily routine that build on the personal momentum a good cleaning and decluttering can initiate.

Cleaning also alleviates depression. When you get home after a stressful day at work only to be confronted with a dirty, disorganized home, the cortisol levels that have built up over the course of the day are reinforced so you’re unable to relax. Your sleep, mood, and sense of optimism suffer, leaving you feeling strung out and unable to carry out your normal daily routine.

Physical Benefits
One of the great benefits of cleaning is that you can improve your mental state with your own hands. By carrying out all those old boxes you’ve been staring at for months, you’ve taken control of the situation and done something resolutely positive. It’s not unlike the sense of accomplishment one might get from running or bicycling further and faster than ever before.
And there’s a chance a dirty house could be contributing to illness in your family. As HomeAdvisor explains, “Issues like mold, radon and carbon dioxide can be hazardous to your health. If your home contains one or more of these elements, you may be at risk for ailments that could have been avoided!” And, of course, cleaning improves your physical environment when you clear out all those allergens and toxins that constitute a threat to respiratory health.
Creating a clean space also encourages better personal health habits, including eating healthier foods. The August 13, 2013, issue of the journal Psychological Science published a study in which people working in an orderly space for just 10 minutes tended to choose an apple over a chocolate bar, unlike people who worked in a messy space for that period of time. The study’s conclusion was that people in a disordered environment are apt to seek out coping mechanisms, such as choosing less healthy “comfort” foods.
A similar study in the Journal of Obesity found that people who are inclined to stay organized in their personal habits were more likely to stick with their exercise routines. It concluded that one feels more in tune with the progress the body is making and you’re more enthusiastic about exercise and the possibility of further progress.
Giving your home a good cleaning and decluttering is about more than just tidying up and good hygiene. It’s an exercise in good mental and physical health. So, if you’ve been feeling guilty about procrastinating, consider that rolling up your sleeves and giving the place a good going over will help you feel better in general.

Image courtesy of Pixabay.com
Posted by AMRAP Fitness at 3:56 PM No comments: 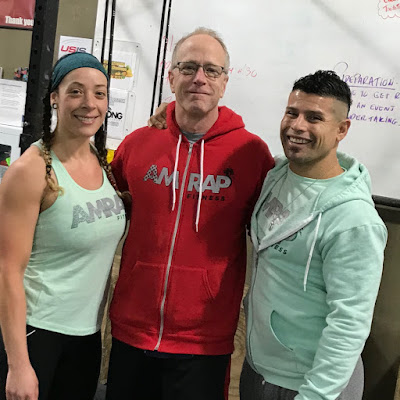 Posted by AMRAP Fitness at 3:32 AM No comments: 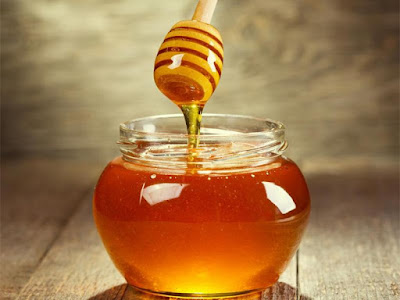 It can help reduce cholesterol and, therefore, decrease your risk for coronary artery disease.

Honey can bring temporary relief to the scalp by targeting dandruff. A 2001 study published in the European Journal of Medical Research found applying honey diluted with 10 percent warm water to problem areas and leaving it on for three hours before rinsing led to itch relief and no scaling within a week. Skin lesions healed within two weeks and patients even showed an improvement in hair loss. The patients did not relapse even after six months of use.
Thanks to honey's antibacterial and antifungal properties, it can also treat seborrheic dermatitis and dandruff, which are often caused by an overgrowth of fungus. Moreover, “honey also has anti-inflammatory properties, which address the redness and itching on the scalp,” Brennecke said.


https://www.healthline.com/nutrition/10-benefits-of-honey#section3
Posted by AMRAP Fitness at 7:30 AM No comments:


Posted by AMRAP Fitness at 7:30 AM No comments:

The holidays are coming! 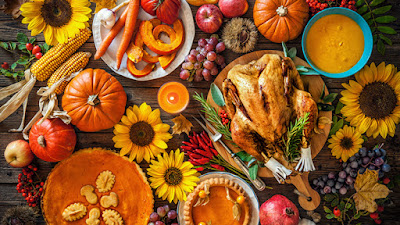 The holidays go by in a blur and they can be some of our most memorable times and also some of our most stressful of times.
Many people struggle this time of the year with their nutrition and fitness goals due to this stress.
Let’s talk about some tools for navigating the many seasonal treats, beverages and social gatherings so that we can slow down, enjoy these moments, and truly savor all that this holiday season has to offer. 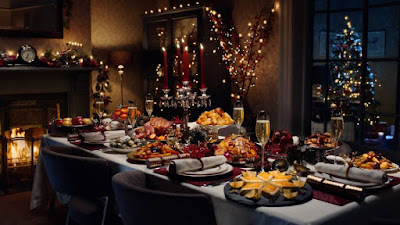 Posted by AMRAP Fitness at 5:01 AM No comments: