Everything Is Useful (Stepping Out Of The Box), Creatine x 1, & Fish Oil Squared

Everything Is Useful (Stepping Out Of The Box), Creatine x 1, & Fish Oil Squared 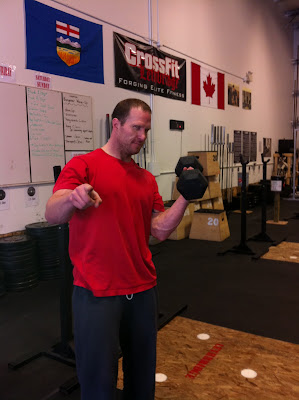 Strongest Guy I Know Doing Curls?  You Should, Too.
Jump back one year; two enthusiastic strength and conditioning coaches, armed with nothing more than a Toyota Yaris, an eclectic iPod bursting with music, and a Chris Spealler look-a-like hooked on metcon so bad he was mute, walked through the doors of Catalyst Athletics.  Things would never be the same again.
I'm reminiscing for a good reason; the lessons learned at the seminar are still fresh in my mind today, and I apply them everyday.  It was an awesome conglomeration of ideas from OUTSIDE the box.   I wrote briefly about it here.

Still, to this day, one of the best lectures I've attended was from Gant Grimes; he instilled the value that everything has a purpose.  He specifically used the example of WHY someone SHOULD do LSD (long slow distance---and I agree, 100%).  The quote "Everything works...up to a point" cannot be understated.
After a phenomenal training session just this last Tuesday, it got me to thinking:  Why do people pigeon-hole themselves into training a certain way, when, technically, EVERYTHING works?  And especially when stuff they DON'T do would even have a higher degree of efficacy?
The great thing about Crossfit is that there's such a vast variety and diversity of skills involved that we are technically always making linear progression.  That being said, folks still confine themselves to, at most, a dozen different movements on a regular basis.  For most people, these are things they 1) like, 2) are relatively good at, and 3) want to get better at.
Now, this isn't a crime by any means; an essential part of training is doing it because it's fun.  But when progress stalls, we need to look at why.  There's always a bazillion variables involved in this.  Without ranting on and on and making little sense, let me leave you with this:
"Insanity: doing the same thing over and over again and expecting different results"
---Albert Einstein

EPA but not DHA appears to be responsible for the efficacy of omega-3 long chain polyunsaturated fatty acid supplementation in depression: evidence from a meta-analysis of randomized controlled trials.

BACKGROUND: Epidemiologic and case-control data suggest that increased dietary intake of omega-3 long-chain polyunsaturated fatty acids (omega3 LC-PUFAs) may be of benefit in depression. However, the results of randomized controlled trials are mixed and controversy exists as to whether either eicosapentaenoic acid (EPA) or docosahexaenoic acid (DHA) or both are responsible for the reported benefits.
OBJECTIVE: The aim of the current study was to provide an updated meta-analysis of all double-blind, placebo-controlled, randomized controlled trials examining the effect of omega3 LC-PUFA supplementation in which depressive symptoms were a reported outcome. The study also aimed to specifically test the differential effectiveness of EPA versus DHA through meta-regression and subgroup analyses.
DESIGN: Studies were selected using the PubMed database on the basis of the following criteria: (1) randomized design; (2) placebo controlled; (3) use of an omega3 LC-PUFA preparation containing DHA, EPA, or both where the relative amounts of each fatty acid could be quantified; and (4) reporting sufficient statistics on scores of a recognizable measure of depressive symptoms.
RESULTS: Two hundred forty-one studies were identified, of which 28 met the above inclusion criteria and were therefore included in the subsequent meta-analysis. Using a random effects model, overall standardized mean depression scores were reduced in response to omega3 LC-PUFA supplementation as compared with placebo (standardized mean difference = -0.291, 95% CI = -0.463 to -0.120, z = -3.327, p = 0.001). However, significant heterogeneity and evidence of publication bias were present. Meta-regression studies showed a significant effect of higher levels of baseline depression and lower supplement DHA/EPA ratio on therapeutic efficacy. Subgroup analyses showed significant effects for: (1) diagnostic category (bipolar disorder and major depression showing significant improvement with omega3 LC-PUFA supplementation versus mild-to-moderate depression, chronic fatigue and non-clinical populations not showing significant improvement); (2) therapeutic as opposed to preventive intervention; (3) adjunctive treatment as opposed to monotherapy; and (4) supplement type. Symptoms of depression were not significantly reduced in 3 studies using pure DHA (standardized mean difference 0.001, 95% CI -0.330 to 0.332, z = 0.004, p = 0.997) or in 4 studies using supplements containing greater than 50% DHA (standardized mean difference = 0.141, 95% CI = -0.195 to 0.477, z = 0.821, p = 0.417). In contrast, symptoms of depression were significantly reduced in 13 studies using supplements containing greater than 50% EPA (standardized mean difference = -0.446, 95% CI = -0.753 to -0.138, z = -2.843, p = 0.005) and in 8 studies using pure ethyl-EPA (standardized mean difference = -0.396, 95% CI = -0.650 to -0.141, z = -3.051, p = 0.002). However, further meta-regression studies showed significant inverse associations between efficacy and study methodological quality, study sample size, and duration, thus limiting the confidence of these findings.
CONCLUSIONS: The current meta-analysis provides evidence that EPA may be more efficacious than DHA in treating depression. However, owing to the identified limitations of the included studies, larger, well-designed, randomized controlled trials of sufficient duration are needed to confirm these findings.
PMID: 20439549 [PubMed - indexed for MEDLINE]
Posted by AMRAP Fitness at 4:36 AM