Why I Love CrossFit

Something I found on line about why someone loves this shit.... 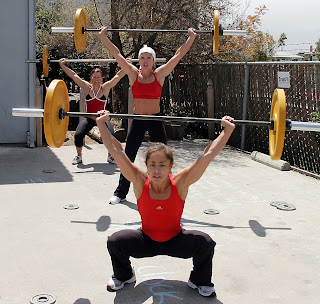 Like 95% of females in this country, I have spent a really stupid number of hours of my life fretting about what number would show up when I stepped on a scale. But about eight years ago, when I decided to seek treatment for my food addiction, I started by buying two books, one called Overcoming Overeating and the other, When Women Stop Hating Their Bodies. In them, the authors said, Do NOT weigh yourself; throw out your scale. And I did. I didn’t weight myself for years. When I went to the doctor’s office, I would close my eyes and tell the nurse not to say my weight out loud. I still don’t weigh myself. I don’t own a scale. I only know approximately how much I weigh.

Here’s the thing, I like measurable results. I like to see data about how I’ve improved. Or not. I think it can be really motivational. But only when there’s no mental illness involved in your outcomes.

Because, for a compulsive overeater/food addict/emotional eater/what-have-you, the absolute worst thing you can do is focus on your weight. If you’re trying to heal yourself from obsessive thoughts about food, weighing yourself adds a whole new level of crazy. I know this first-hand. When I used to go on diets, I would think about nothing but food, I would gorge myself on food I hated because it was low in Points, and I would scheme how to trick the scale—”Maybe if I take off my earrings before I weigh in, I’ll hit my weight goal.”

Now I have a new weight goal. It’s called a PR, and I won’t ever see it by stepping on a scale. A PR is a personal record. As in, you pick up more weight than you ever have before.

I decided to do one rep at each increment from there on out.

Why I love CrossFit (with a hat tip to friend and awesome athlete,Nell, and I quote): My “weight goal” is now something that I want to LIFT, as opposed to something I want to BE.
Posted by AMRAP Fitness at 4:49 AM