How can DHEA benefit your health?

How can DHEA benefit your health? 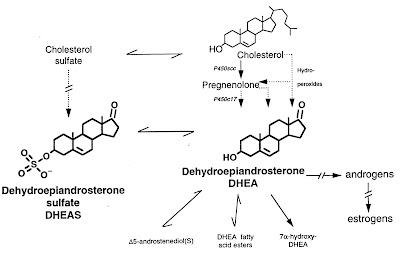 Dehydroepiandrosterone, better known as DHEA, is a steroid hormone. It is naturally synthesized by the body and performs a number of roles.

It has been investigated widely for its possible therapeutic effects in a range of conditions.

Sometimes called the "super hormone" and the "fountain of youth hormone," DHEA is a complex substance that leaves many unanswered questions.

The human body naturally makes DHEA. It can convert into a range of hormones, including androgens and estrogens, the male and female sex hormones.

DHEA is also available in supplements, made synthetically using chemicals found in soy and wild yam. However, consuming wild yam or soy will not enable the human body to make more DHEA.

DHEA supplements claim to help with a range of conditions, including sexual dysfunction, lupus, depression, adrenal insufficiency, cervical cancer, vaginal atrophy, and weight loss. Some research supports its use.

However, DHEA's effectiveness is controversial and rarely supported by evidence. In addition, the quality of products on sale is not always consistent.

What is dehydroepiandrosterone (DHEA)?

DHEA is naturally produced by the body but supplements are also synthetically made in labs.

DHEA is an endogenous steroid hormone. This means it is naturally made by the body, and it spurs specific tissues or cells into action.

DHEA is one of the most abundant steroid hormones in the human body. It is produced by the adrenal glands, the gonads, and the brain.

It is normally found in the form of dehydroepiandrosterone sulfate (DHEAS). The body holds DHEAS in reserve and converts it to specific hormones when needed.

It is important for creating estrogen and androgen sex hormones and contributes to the development of so-called androgenic effects, or masculinization. These changes include the production of oilier skin, changes in body odor, and the growth of armpit and pubic hair.
DHEA may also have other roles, for example, as a neurosteroid. In this role, it would directly affect neuronal excitability.

Some say that DHEA enhances athletic performance. There is little evidence to support this, but the World Anti-Doping Agency (WADA) prohibits its use in sporting competitions.

Production of DHEA peaks when people are in their 20s and 30s, and then it declines. This is the main reason that DHEA is considered an important chemical in the aging process, and a potential target for anti-aging drugs.

Wild yam and soy contain chemicals that can be converted into DHEA in a laboratory. However, the body cannot convert them in the same way. Eating soy or yams will not increase DHEA levels.

Research into DHEA has increased in recent years, but many questions remain about its effectiveness and possible adverse effects.

DHEA and the brain
DHEA can act as a neurosteroid, directly affecting targets inside the brain.
Its activities are not fully understood, but some researchers believe it helps protect neurons from toxins and after injuries, such as strokes.

Some research suggests that it may contribute to nerve growth, and that it may help reduce inflammation and prevent cell death.

It may also modulate mood. For this reason, it has been studied for the treatment of mood disorders, such as anxiety and depression.

Research published in the journal Nature in 2013 found that DHEA enhanced connections between the amygdala and hippocampus and reduced activity levels in both regions. These changes are thought to contribute to an enhanced mood and a reduced memory for emotional events.

Some studies have found that naturally higher levels of DHEA and DHEAS have a positive effect on some types of cognitive tasks.

Similar experiments have not confirmed these findings, and some have produced opposite results.

There are also concerns that DHEA can trigger mania, psychosis, and other mood changes, especially in people with bipolar disorder and other mental health issues. DHEA is not recommended for use alongside various drugs, including antidepressants, mood stablizers, and anti-seizure drugs.

Naturally raising levels of DHEA
DHEA can be increased naturally in certain circumstances.

Medical uses
Over the last decade, DHEA has been studied for its effectiveness in treating a number of diseases and conditions. Success rates have varied.

Bone density
Some diseases cause a reduction in bone density. Some research suggests that artificially raising DHEA levels helps increase bone density, especially in women.
However, not all studies have produced positive results.

Depression
Depression has been linked to low blood levels of DHEA. There is evidence that DHEA could help relieve symptoms of depression.

A review of research, published in 2014, suggested that DHEA might improve symptoms of depression in people with schizophrenia, anorexia nervosa, HIV, and adrenal insufficiency.

However, the use of DHEA is not recommended with drugs commonly used to treat these conditions.

A review in 2013 concluded that "DHEA supplementation in elderly men can induce a small but significant positive effect on body composition."
This can only happen, however, if the body can convert the DHEA in the supplements into androgens or estrogens. The effect on younger people with excess weight is not known.

Anorexia nervosa
A small study of 26 people with anorexia nervosa found that those who took 100 milligrams (mg) of DHEA supplements for 6 months saw an increase in body mass index (BMI) and also enhancements in mood.

Adrenal insufficiency
This happens when the adrenal glands do not produce enough steroid hormones, including DHEA.

Supplementing with DHEA can reduce symptoms of adrenal insufficiency, but side effects can be substantial. Further evidence is needed to confirm its effectiveness overall.

Lupus
This is an autoimmune disorder affecting the skin and organs. DHEA levels are lower than normal in women with lupus. Some research shows that DHEA improves a number of lupus symptoms.

Sexual function
Some studies suggest DHEA may help people with deficits in sexual function, libido, and erectile dysfunction. However, other results have been inconclusive.

The effect appears to be more significant in women who have undergone menopause.
A review of evidence published in 2012 concluded that "DHEA administration is not useful for improving male sexual function."

Aging
Evidence that DHEA supplements could help stave off age-related changes is weak or unproven.

There may also be side effects, such as a reduction in "good" HDL cholesterol and heart palpitations.

HIV
Some studies have suggested that DHEA might help prevent replication of the HIV virus and bolster the immune system, but the authors of at least one study, published in 2007, found that it did not have these effects.

The researchers did not recommend using it routinely as an additional therapy for people with HIV.

In older people, there is a small amount of weak evidence that supports this type of effect. Most studies, especially in adults, have found little or no effect.

DHEA is widely available to purchase over-the-counter, but there is scant evidence to support its safety or effectiveness.

Side effects
Many sources advise against using DHEA, especially without first seeking medical advice, because of the possible side effects.

DHEA affects the endocrine system, which means it affects hormonal activity. Hormonal changes can impact on a range of body systems. As a result, a wide variety of side effects are possible.

In addition, DHEA has not been tested or widely used over a long period of time, so it is not clear what the long-term effects might be.
Side effects appear to vary in different age groups and between diseases.

Side effects in women
Women might experience the following:

Side effects in men
Men might experience the following:
A new version of DHEA, known as 7-keto-DHEA is a natural byproduct of DHEA. Because 7-keto-DHEA is not converted to steroid hormones by the body, the risk of some of the hormonal side effects is reduced.

Although 7-keto-DHEA has been promoted as assisting in weight-loss, building muscle and stimulating the immune system, evidence supporting any of these claims is limited.

Drug interactions
DHEA can interact with a range of drugs. It is important to ask for professional advice before using it.

Medications often interact with each other. DHEA has a complex role, and a range of interactions can occur when using it with other medications.

Anyone who is considering taking DHEA supplements should first speak to a health provider.

Special caution is needed when using DHEA alongside any of the following drugs or substances:

It can also interact with soy, alcohol, licorice, chromium, and fiber.
DHEA must be avoided with testosterone therapy, as it can lead to a low sperm count and enlarged breasts in men and in male characteristics in women.
This list is not exhaustive. It is important to speak to a health provider before using DHEA.

Risks
People with the following risks or conditions should be especially careful when considering DHEA:

DHEA supplements should not be taken during pregnancy or while breastfeeding. Children should not use it.

DHEA is a complicated chemical with many roles. In the future, it may be used in a variety of treatment. For now, however, it is best to be cautious when using it, as there is a lack of evidence regarding its safety and effectiveness.
Posted by AMRAP Fitness at 8:19 AM