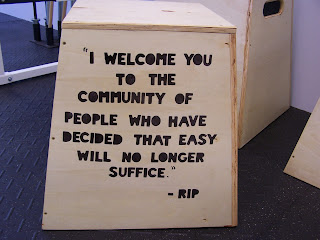 What do a firefighter, a reconnaissance Marine and an Air Force staff sergeant have in common?
As the co-owners of CrossFit 717 in Lemoyne, they are turning midstaters into lean, mean CrossFitting machines.
The international fitness trend — with roots in military-style training — is rapidly becoming popular for its measurable results and its sense of community. Everyone from mixed martial arts fighters to retirees are breaking a sweat in the box — CrossFit lingo for “gym.”
“We refer to our members as athletes. We coach athleticism,” said Aldo Morelli, co-owner of CrossFit 717, who got involved with CrossFit two years ago. A longtime gym and health enthusiast, the Harrisburg firefighter was shocked to find himself completely exhausted 15 minutes into battling a fatal fire in 2008. “What I was doing in the gym was not translating to work,” he said.
So when a colleague mentioned CrossFit, Morelli decided to give it a shot. After one workout he was hooked.
What is it?
Gym goers won’t find juice bars and tanning beds in a CrossFit box. They will find intense, hourlong classes focused on proper movement and form run by coaches who are equal parts group instructor and personal trainer.
Members tackle WODs — workouts of the day — that include repetitions of squats, sit-ups, pull-ups, kettlebell exercises, sprints and weights.
The WOD is posted daily on the main CrossFit website, www.crossfit.com, and is designed to build on previous workouts to maximize results and create a consistency between affiliate gyms. In a class, everyone performs the same exercises scaled to their own abilities with the support of coaches correcting form and motivating the exhausted.
“I’m already in the best shape I’ve ever been in since high school,” said Erin Pryor, 24, of Hampden Twp., who works out at CrossFit 717 with roommate, Tiffany Wentzel.
CrossFit’s definition of fitness is based on an individual’s proficiency in 10 areas, including cardio endurance, stamina, speed, balance and coordination. WODs based on these tenets can last anywhere from 5 minutes to 45 minutes and are timed so participants can measure their improvement.
“The hour you spend in the gym prepares you for the 23 you spend outside of it,” said Tim Steel, owner of CrossFit Hershey.

JOHN C. WHITEHEAD, The Patriot-NewsKara Shiffer of New Cumberland jumps onto a wooden box as part of the WOD, or workout of the day, at Crossfit 717 in Lemoyne.
Translating to life
How helpful is the 30 minutes you spend on a recumbent bike at the gym when it comes to spreading mulch or running after the grandkids?
Not very, said Paul Erwin, co-owner of CrossFit 717 and owner of Hershey Orthopedic & Spine Rehabilitation.
“We teach movements that are inherent to life,” said Erwin, who incorporates CrossFit training into his patients’ therapy when appropriate. One of his patients became the gym’s inaugural member when it opened last September.
“Anybody of any fitness level can start it. It’s all scaleable to a person’s fitness level. The coaches are great at striking a balance between challenging you, but not killing you,” said Jason Umberger, 42, Swatara Twp.’s deputy chief of police. Umberger, the gym’s first member, began CrossFit exercises as part of his physical therapy to treat two bulging discs. His two teenage daughters now join him every week.
Often used by military units and law enforcement agencies, the high-intensity WODs incorporate exercises that are designed to translate into skills for every aspect of life an athlete encounters, from lugging a basket around the grocery store to facing life and death situations.
“I got involved with CrossFit while in the military. I was looking for something to help me in my training for pararescue,” said CrossFit 717 co-owner Dan Dutcavich. Since then he has helped establish CrossFit affiliates at Wright Patterson Air Force Base in Ohio and Ramstein Air Base in Germany before returning to the midstate.
Meanwhile Morelli, four months into his CrossFit training, found unflagging energy when faced with another fire.
“We train for life,” Morelli said. “Every movement we do has a function, and it will carry over to real life.”
CrossFit community
Even with the military influence, there seems to be no discernible pattern to the age, gender or fitness levels of midstate CrossFitters. Grandmas, EMTs, homemakers and law-enforcement members share the box and a river of sweat during workouts.
“The people there are amazing and encouraging. It’s just a confidence boost you can’t get anywhere else,” said Wentzel, 25, a nurse.
“It’s all about the community aspect. The workouts are tough, and if you were by yourself you wouldn’t finish. Everyone else is going through the same pain you are,” Pryor said.
CrossFitters worldwide consider themselves to be part of a community. The main website serves as an online community with each day’s WOD posting, pictures and videos of challenges from affiliate members and breakdowns and demos of each exercise.
The website also pays tribute to heroes — fallen soldiers and law-enforcement members — with short bios and WODs named in memory of each individual. These particular classes are even more grueling than the regular WODs, but always draw a crowd.
“We honor those who can’t work out anymore,” Steel said. “Imagine thousands and thousands of people working out in your name. What better way to honor a hero?”
Posted by AMRAP Fitness at 4:43 AM