Can You Live Forever?


Can You Live Forever? Maybe Not--But You Can Have Fun Trying

In this chapter from his new e-book, journalist Carl Zimmer tries to reconcile the visions of techno-immortalists with the exigencies imposed by real-world biology
By Carl Zimmer  | Wednesday, December 22, 2010 | 27 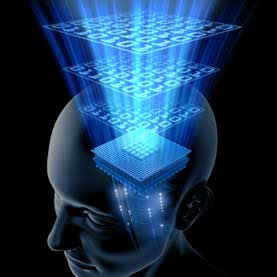 The US economy relies on a guaranteed supply of energy. What steps should the US government take to help secure national energy supply? (Click all that apply, and please contribute to the conversation in the comments below)
Editor's Note: Carl Zimmer, author of this month's article, "100 Trillion Connections," has just brought out a much-acclaimed e-book, Brain Cuttings: 15 Journeys Through the Mind (Scott & Nix), that compiles a series of his writings on neuroscience. In this chapter, adapted from an article that was first published inPlayboy, Zimmer takes the reader on a tour of the 2009 Singularity Summit in New York City. His ability to contrast the fantastical predictions of speakers at the conference with the sometimes more skeptical assessments from other scientists makes his account a fascinating read.
Let's say you transfer your mind into a computer—not all at once but gradually, having electrodes inserted into your brain and then wirelessly outsourcing your faculties. Someone reroutes your vision through cameras. Someone stores your memories on a net of microprocessors. Step by step your metamorphosis continues until at last the transfer is complete. As engineers get to work boosting the performance of your electronic mind so you can now think as a god, a nurse heaves your fleshy brain into a bag of medical waste. As you—for now let's just call it "you"—start a new chapter of existence exclusively within a machine, an existence that will last as long as there are server farms and hard-disk space and the solar power to run them, are "you" still actually you?
This question was being considered carefully and thoroughly by a 43-year-old man standing on a giant stage backed by high black curtains. He had the bedraggled hair and beard of a Reagan-era metalhead. He wore a black leather coat and an orange-and-red T-shirt covered in stretched-out figures from a Stone Age cave painting.
He was not, in fact, insane.
The man was David Chalmers, one of the world's leading philosophers of the mind. He has written some of the most influential papers on the nature of consciousness. He is director of the Centre for Consciousness at Australian National University and is also a visiting professor at New York University. In other words, he has his wits about him.
Chalmers was speaking midway through a conference in New York called Singularity Summit, where computer scientists, neuroscientists and other researchers were offering their visions of the future of intelligence. Some ideas were tentative, while others careened into what seemed like science fiction. At their most extreme the speakers foresaw a time when we would understand the human brain in its fine details, be able to build machines not just with artificial intelligence but with superintelligence and be able to merge our own minds with those machines.
"This raises all kinds of questions for a philosopher," Chalmers said. "Question one: Will an uploaded system be conscious? Uploading is going to suck if, once you upload yourself, you're a zombie."