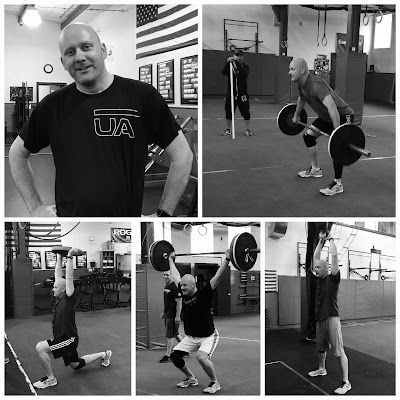 Joe’s Fitness Journey
My fitness journey is a short one.  After high school basketball there isn’t much to tell. I picked up a lot of unhealthy habits and fitness wasn’t something I put much time into.  Every now and then I would join a gym but, not knowing what to do when I got there, that never lasted for more than a few weeks.  I tried to get into running a few times but found it boring and never stuck with it.  Swimming was another activity I tried for a little while but, as with the other attempts, that didn’t last long.  There was about a 6 month period when I was required to do some physical training (running, pushups, sit-ups) at the start of my career but, when that period of training was over I soon fell back into an inactive lifestyle. The older I got the more I started to think about my health.  I slowly started to change some things around in my life in an effort to be healthier.  I knew I needed to make exercise a priority.  I was looking for something that I hadn’t tried before, something that would be a good workout while also keeping me interested in coming back.  A friend of mine gave me some info about a Crossfit class he was taking and suggested I give it a shot.  Shortly after that I started my 3 day trial at AMRAP fitness and while it was challenging I really enjoyed it and thought it was something I could see myself committing to. About one year later I’m still at it, which is a lot better than I’d done previously. In that year I’ve made some improvement, physically, and also learned a lot about fitness, nutrition and positive mental attitude from Coach Ray.  While I have made some progress over the last year, I have a long way to go and I look forward to the challenge, as my fitness journey continues.
Posted by AMRAP Fitness at 3:31 AM