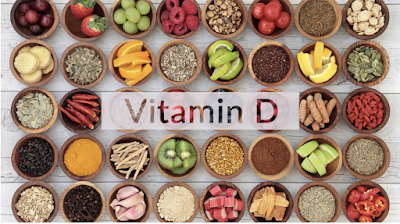 What Is Vitamin D?

Vitamin D is a fat-soluble vitamin that’s stored in the liver and fatty tissues. This means that increased body fat has the ability to absorb vitamin D and keep it from being used within our body. Vitamin D is somewhat different than other vitamins because our bodies make most of our vitamin D on their own, rather than solely relying on food sources.

The way our bodies make vitamin D is to convert sunshine into chemicals that are used by the body. In particular, when UV-B sunshine rays land on the skin, a substance in the skin called 7-dehydrocholesterol is literally converted into vitamin D3.

7-dehydrocholesterol or the cholesterol in our skin — and very similar to cholesterol itself — converts “previtamin D” and makes it into usable vitamin D3, which is sometimes also called provitamin D. Previtamin D first travels through the kidneys and liver in the bloodstream and then is converted into a biologically active and usable substance called calcitriol.

Vitamin D actually becomes a hormone within the body, particularly a secosteroid hormone. What we know as vitamin D is really a precursor to a steroid hormone. It impacts not only our skeletal structure, but also our blood pressure, immunity, mood, brain function and ability to protect ourselves from cancer.

Why do I need vitamin D?

Your body must have vitamin D to absorb calcium and promote bone growth. Too little vitamin D results in soft bones in children (rickets) and fragile, misshapen bones in adults (osteomalacia). You also need vitamin D for other important body functions.

Vitamin D deficiency has now been linked to breast cancer, colon cancer, prostate cancer, heart disease, depression, weight gain, and other maladies. These studies show that people with higher levels of vitamin D have a lower risk of disease, although they do not definitively prove that lack of vitamin D causes disease -- or that vitamin D supplements would lower risk.

How much do you need?

There has been some controversy over the amount of vitamin D needed for healthy functioning. Recent research indicates that you need more vitamin D than was once thought. Normal blood serum levels range from 50 to 100 micrograms per deciliter. Depending on your blood level, you may need more vitamin D.


The Institute of Food and Agricultural Sciences reports new recommendations based on international units (IUs) per day. The recommended IUs for vitamin D are:
children and teens: 600 IU
adults up to age 70: 600 IU
adults over age 70: 800 IU
pregnant or breastfeeding women: 600 IU

It can be hard to get enough vitamin D each day through sun exposure and food alone, so taking vitamin D supplements can help.

The Benefits of Vitamin D

Vitamin D plays a substantial role in the regulation of calcium and maintenance of phosphorus levels in the blood, two factors that are extremely important for maintaining healthy bones. We need vitamin D to absorb calcium in the intestines and to reclaim calcium that would otherwise be excreted through the kidneys.

Vitamin D deficiency in children can cause rickets, a disease characterized by a severely bow-legged appearance due to softening of the bones. In adults, vitamin D deficiency manifests as osteomalacia (softening of the bones) or osteoporosis. Osteomalacia results in poor bone density and muscular weakness. Osteoporosis is the most common bone disease among post-menopausal women and older men.

Research has shown that vitamin D might play an important role in regulating mood and warding off depression. In one study, scientists found that people with depression who received vitamin D supplements noticed an improvement in their symptoms. In another study of people with fibromyalgia, researchers found vitamin D deficiency was more common in those who were also experiencing anxiety and depression.

Several observational studies have shown an inverse relationship between blood concentrations of vitamin D in the body and risk of type 2 diabetes. In people with type 2 diabetes, insufficient vitamin D levels may negatively affect insulin secretion and glucose tolerance. In one particular study, infants who received 2,000 International Units per day of vitamin D had an 88 percent lower risk of developing type 1 diabetes by the age of 32.

Children with normal blood pressure who were given 2,000 International Units (IU) per day had significantly lower arterial wall stiffness after 16 weeks compared with children who were given only 400 IU per day.

Low vitamin D status has also been associated with a higher risk and severity of atopic childhood diseases and allergic diseases, including asthma, atopic dermatitis, and eczema. Vitamin D may enhance the anti-inflammatory effects of glucocorticoids, making it potentially useful as a supportive therapy for people with steroid-resistant asthma.

Pregnant women who are deficient in vitamin D seem to be at greater risk of developing preeclampsia and needing a cesarean section. Poor vitamin D status is associated with gestational diabetes mellitus and bacterial vaginosis in pregnant women. It is also important to note that high vitamin D levels during pregnancy were associated with an increased risk of food allergy in the child during the first 2 years of life.

Vitamin D is extremely important for regulating cell growth and for cell-to-cell communication. Some studies have suggested that calcitriol (the hormonally active form of vitamin D) can reduce cancer progression by slowing the growth and development of new blood vessels in cancerous tissue, increasing cancer cell death, and reducing cell proliferation and metastases. Vitamin D influences more than 200 human genes, which could be impaired when we do not have enough vitamin D.


Vitamin D deficiency has also been associated with an increased risk of cardiovascular disease, hypertension, multiple sclerosis, autism, Alzheimer's disease, rheumatoid arthritis, asthma severity, and swine flu, however more reliable studies are needed before these associations can be proven. Many of these benefits occur through Vitamin D's positive effect on the immune system.

The Upper Level limit recommended for vitamin D is 4,000 IU per day. However, the National Institutes of Health (NIH) has suggested that vitamin D toxicity is unlikely at daily intakes below 10,000 IU per day. Excessive consumption of vitamin D (hypervitaminosis D) can lead to over calcification of bones and hardening of blood vessels, kidney, lungs, and heart. The most common symptoms of hypervitaminosis D are headache and nausea but can also include loss of appetite, dry mouth, a metallic taste, vomiting, constipation, and diarrhea.


It is best to get your required Vitamin D from natural sources. When choosing supplements, choose your brand carefully as the FDA does not monitor safety or purity of supplements.

https://www.medicalnewstoday.com/articles/161618.php
Posted by AMRAP Fitness at 6:12 AM