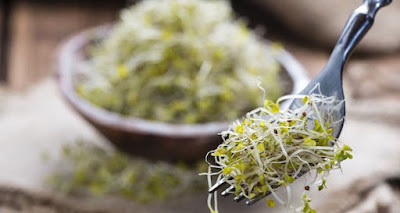 Broccoli sprouts are not as popular as the mature broccoli in American diets but sprouts have been proven to have amazing benefits to cancer fighting/prevention and removing disease causing compounds from the body. In 1997 there was an article published by New York Times and it made the general public aware of the incredible cancer fighting compounds found in broccoli sprouts.
Broccoli sprouts are the precursor to mature broccoli and even tho they don’t contain some of the vitamins that mature broccoli does, it contains a great deal more glucosinolates. These are natural components of many pungent plants, these natural chemicals most likely contribute to plant defense against pests and diseases. Brassica vegetables including broccoli sprouts as well as other cruciferous veggies(kale, arugula, radishes) contain an enzyme called myrosinase that functions as part of gut bacteria to break down glucosinolates into their “usable” forms one category of which is known as isothiocyanate. Isothiocyanates seem to activate other enzymes responsible for transforming and/or removing xenobiotics(disease causing compounds) from the body. Sources describe this process as your body deploying its natural disease fighting power which is activated by isothiocyanates.

Broccoli sprouts contains extremely high levels of glucoraphanin, the glucosinolate precursor Sulforaphane. Actually broccoli sprouts contain about 10-100 times the amount than adult broccoli. Picking broccoli sprouts at 3 days seems to be the sweet spot for maximizing the quantity of glucoraphanin. Eating raw and chewing thoroughly is best way. Why should we care about Sulforaphane for one, this compound has some super impressive cancer preventing and cancer fighting capabilities. It’s also been shown to support the heart, bones and respiratory system, detoxify environmental chemicals. One way Sulforaphane accomplished these things is through epigenetics. An exciting new scientific discovery about how genetic changes can be accomplished by changes to diet and lifestyle. Epigenetics is the science of the “layer” on top of our DNA that instructs cells to turn off and on, and how to function. The bioactives from broccoli sprouts can influence many of the genes that govern cellular function. 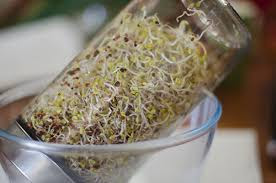 So as you can see broccoli sprouts super power comes from the cancer preventing/fighting abilities of the glucosinalates. Which brassica vegetables have the ability to break down into “usable” forms. One of the forms is Sulforaphane which has been shown to support the heart, bones, respiratory system and detoxify environmental chemicals. The way these chemicals accomplish this is through epigenetics. Which scientist have discovered about how genetic changes can be accomplished by changes to diet and lifestyle. Broccoli sprouts are more readily available as powered form which can make it easier to get these great cancer fighting and cleansing abilities. Broccoli sprouts should be part of a healthy diet and the science is proven.

Posted by AMRAP Fitness at 1:22 PM