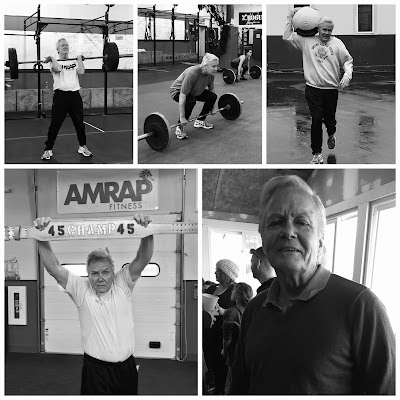 I had a vague idea that a “boot camp” style fitness class was available but I thought the fitness routine I had going was good enough – maybe twice a week at the gym with my own leisurely-paced workout. I would do 30 minutes on the treadmill and then wander aimlessly among the machines and do a few reps on any that seemed interesting.  That and the occasional bike ride/run/swim were my idea of a solid fitness regimen.  I also knew that my diet was typically high in carbohydrates, and I would occasionally try to reduce my intake, with the same undisciplined approach.

But as my weight crept steadily up and I began to experience injuries, I knew something had to change.  A friend who was in Ray’s Crossfit invited me to give it a try.

At 66 years old, I have not worked out like this since my college days.  In the two years since joining the Crossfit cult, I’ve dropped about 20 pounds and reduced my body fat percentage significantly.  I’ve also learned how lame my concept of fitness had truly been.  My body is in the best shape it’s been in a long time.  And the Greeks were right –  “mens sana in corpore sano.”

It seems that not a week goes by now that I don’t read about some new scientific study that validates the Crossfit method.  Whether it is the superiority of the High Intensity Interval Training (HIIT) approach, or the importance of changing your high sugar/alcohol/carb diet, the Crossfit approach seems to have been ahead of the game. The studies show that to be especially true for those of us in the “masters” category.

Other than smashing up my shins by being a little over-confident of my box-jumping abilities, I haven’t had a single injury.   That is a testament to the couching skills of Ray and his staff here at AMRAP.

This was the best decision I have ever made!

Ben
Posted by AMRAP Fitness at 8:34 AM