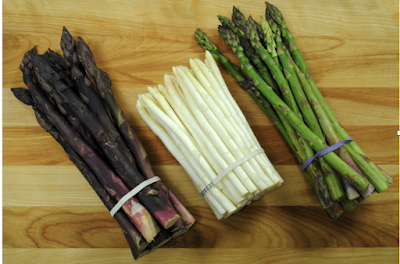 The Origins of Asparagus
A distant cousin of the onion, the distinguished asparagus is also a member of the lilaceae family. Its history goes back as far as that of the leek and has been consumed for over 2000 years. This garden plant originated in the eastern Mediterranean countries and traces of wild varieties have been discovered in Africa. Archaeologists believe that it was also cultivated in Egypt.
In ancient Greece, asparagus was considered to be a plant with sacred and aphrodisiac virtues and the Greeks were interested in its biological and pharmaceutical qualities.
Hippocrates, the ancient Greek doctor, used asparagus to treat diarrhea and pains of the urethra. This plant, in fact, contains asparagines which is known for it diuretic properties. The Romans, for their part, appreciated the plants gastronomic qualities. They ate it as an entrée or as a vegetable accompanying fish. Asparagus was largely forgotten during the Middle Ages but continued to be cultivated by the Arabs. Caesar’s legions returning from the Orient brought the asparagus back to Europe.
Starting in the 16th   century, asparagus was served in the royal courts of Europe and in the 17th century it was cultivated in France for Louis XIV who was, apparently, very fond of it. At that time, according to the records, it was the size of a swan’s feather and was grown solely for the requirements of the nobility. Only in the 18th century did the asparagus make its appearance on the local marketplace and in numerous culinary works. Today, green asparagus is found in America and China. The white variety is cultivated mainly in Europe.
There are three varieties of asparagus: American and British, which is green; French, which is purple; and Spanish and Dutch, which is white. The most common type of asparagus is green; the white asparagus is more delicate and is difficult to harvest; the purple asparagus is smaller and fruitier in flavor. 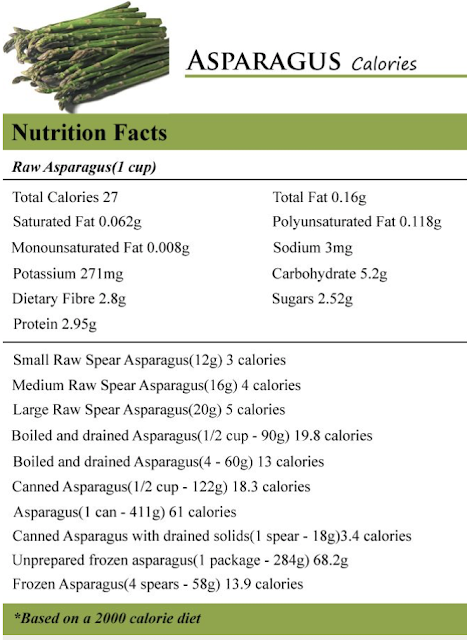 Health Benefits of Asparagus Nutrition
1. Good Source of Vitamin K
Asparagus is high in vitamin K, which is the blood clotting vitamin. Many studies have found that vitamin K can also improve our bone health. These studies have also demonstrated that vitamin K can not only increase bone mineral density in osteoporotic people, but it can actually reduce fracture rates.
2. Contains Anti-inflammatory and Antioxidant Properties
Anti-inflammatory and antioxidant nutrients help to reduce common chronic health problems including type 2 diabetes, heart disease and cancer. Asparagus is full of anti-inflammatory properties and antioxidants, both of which make it a great food for preventing disease. The antioxidant glutathione is thought to slow the aging process and break down free radicals; it can also help to protect your skin from sun damage and pollution
3. Good Source of Fiber
Not only is asparagus low in fat and calories (one cup sets you back a mere 32 calories), but it also contains lots of soluble and insoluble fiber, making it a good choice if you’re trying to lose weight. Because your body digests fiber slowly, it keeps you feeling full in between meals. As a good source of fiber, asparagus promotes regularity and digestive health and may help reduce your risk of heart disease, high blood pressure and diabetes.
4.  It Can Help Fight Cancer

This herbaceous plant—along with avocado, kale and Brussels sprouts—is a particularly rich source of glutathione, a detoxifying compound that helps break down carcinogens and other harmful compounds like free radicals. This is why eating asparagus may help protect against and fight certain forms of cancer, such as bone, breast, colon, larynx and lung cancers.
5. Asparagus Is a Brain Booster

Another anti-aging property of this delicious spring veggie is that it may help our brains fight cognitive decline. Like leafy greens, asparagus delivers folate, which works with vitamin B12—found in fish, poultry, meat and dairy—to help prevent cognitive impairment. In a study from Tufts University, older adults with healthy levels of folate and B12 performed better on a test of response speed and mental flexibility. (If you’re 50-plus, be sure you’re getting enough B12: your ability to absorb it decreases with age.)

6. Helps Support a Healthy Pregnancy
Asparagus is an excellent source of folate, also known as vitamin B9.
Just half a cup of asparagus provides adults with 34% of their daily folate needs and pregnant women with 22% of their daily needs. Folate is an essential nutrient that helps form red blood cells and produce DNA for healthy growth and development. It’s especially important during the early stages of pregnancy to ensure the healthy development of the baby. Getting enough folate from sources like asparagus, green leafy vegetables and fruit can protect against neural tube defects, including spina bifida
7. Serves as a Natural Diuretic
Something else to know about asparagus nutrition is that the unique chemical properties of asparagus make it act as a natural diuretic, which means asparagus promotes the production of urine. This increases the excretion of water from the body, in particular ridding the body of excess salt and fluid. Asparagus is used along with lots of fluids as “irrigation therapy” to increase urine output. This is especially beneficial for people who suffer from edema, which is the accumulation of fluids in the body’s tissues. It’s also helpful for people who have high blood pressure or other heart-related diseases. Additionally, researchers have concluded that another benefit of asparagus nutrition is that it can be also used to treat urinary tract infections and other conditions of the urinary tract that cause pain and swelling.
8. High in Vitamin B1 Thiamine
Like most of the B-vitamins, thiamine plays a role in how our bodies use energy from food and is vital for cellular function. Thiamine specifically helps the body convert carbohydrates to energy, which is important for metabolism, focus and strength. B vitamins play a key role in the metabolism of sugars and starches, so they are critical for blood sugar management. B vitamins also play a key role in regulating homocysteine, which is an amino acid that can lead to heart disease if it reaches excessive levels in our blood. This makes asparagus a great option for heart health, too.
9. Nourishes the Digestive Tract
Asparagus contains significant amounts of the nutrient inulin, which does not break down in our digestive tract. Instead, it passes undigested to our large intestines, where it becomes a food source for good and healthy bacteria. Good bacteria are responsible for better nutrient absorption, a lower risk of allergies, and a lower risk of colon cancer
10. It Gets You in the Mood
You may want to consider adding asparagus to your next date night menu: the veggie is a natural aphrodisiac thanks to vitamin B6 and folate, which can help boost feelings of arousal. Plus, vitamin E stimulates sex hormones, including estrogen in women and testosterone in men.
11. Eases the Hangover
If you crave a greasy breakfast the morning after too many drinks, research suggests that a side of asparagus might be the better choice. A 2009 study published in the Journal of Food Science conducted on laboratory-grown cells suggested that the minerals and amino acids in asparagus extract may help ease hangovers and protect liver cells from the toxins in alcohol.
As you can see, asparagus is a nutritious and tasty addition to any diet. It is low in calories and a great source of nutrients, including fiber, folate and vitamins A, C and K. Additionally, eating asparagus has a number of potential health benefits, including weight loss, improved digestion, healthy pregnancy outcomes and lower blood pressure.

Posted by AMRAP Fitness at 6:03 AM