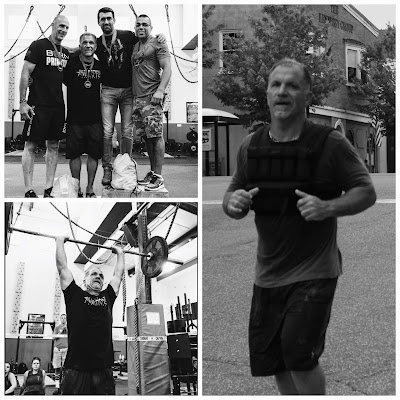 As I sit down to write this blog, I can’t help but look back at what brought me to AMRAP Fitness  For many years I worked out at NY sports club, with some success of lifting (arms, chest, back, stomach, shoulders begrudgingly, legs once in a chuck, and cardio coupled with running out doors. A couple of years ago that gym closed down and I needed a new gym. I checked out 24 hour fitness, but wasn’t feeling it. My sons girlfriend at the time was affiliated with Vision Sports Club and told me what a nice gym it was. So I took a tour and decided to join (it didn’t hurt that they gave a uniform discount) and away I went.

So to back up a little, I always stayed in some kind of shape whether it was wrestling in high school, bar league soft ball, flag football or skiing. I have belonged to various gyms in the county over the years and have worked out with an assortment of friends and personal trainers with different levels of success. To boot, being involved in the NYC Department of Corrections it is vital for me to be prepared physically and mentally for challenges in this type of occupation.

As I aged and raised my family, I was fortunate enough to coach my children in various sports. Which brought new physical challenges of demonstrating proper technique to athletes. As a great experience as it was it came to an end as my children got older. As time went on I continued going to the gym and was really hitting a the wall.

So as I mentioned above I made my way to Vision. Although this was a fresh start, I was just going though the motions. Unfortunately the only results I was seeing was gaining weight on the scale. Which brought me to my next step, hiring a personnel trainer. I didn't receive what I expected through personal training. However, the one silver lining to that experience was that it brought me through the AMRAP Fitness 5am class. I had herd mixed reviews about CrossFit, but I felt I needed a good kick in the ass.

I approached Ray and he gave me a 3 day complimentary pass and I was welcomed to the AMRAP Fitness community with open arms. I was hopping Ray would give me the same magic pill that all the 5amer were taking so I could be as fit as them. Nevertheless, with the short time I found out this group of dedicated athletes broke there ass 5 to 7 days a week. So I put my head down and followed suite. As they say, "Rome was not built in a day" and at this point I barley had a foundation to build on being forty pounds overweight and deconditioned.

So away I went right before the holiday season (not a great time to get going) but this was the hand I was dealt. Ray started me off slow and I started dragging my ass out of bed at 4 to get to class by 4:50. For the first three months I did the daily workouts and held on for dear life. As time went on I started to make small strides.

In February my daughter Emily told me about the keto diet (which she was doing great on) and sent me a few things to get me started. I let Ray know and spoke to a few people who had been on it and away I went. In a short time the weight was coming off and with the combination of training and keto.

The support for Coach Ray, Nat, and my AMRAP Fitness community I was finally heading in the right direction. Overtime I have lost forty pounds, competed in a Savage race, Box life games, and on my 55th birthday was able to do a pull over to support, and a few days later I did three hand stand push ups (all videoed by coach Nat thank you).

Now the hard part is maintaining my weight, physical fitness, and getting out of bed five days a week (sometimes six). With the help of Coach Ray, Coach Nataliya, the 5 am crew, and the rest of the AMRAP Fitness community it will be a much easier to obtain.

This was one of the best decisions I have ever made.

Posted by AMRAP Fitness at 4:31 AM