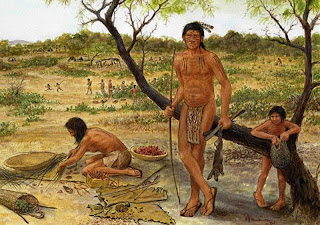 The Paleo Diet is a way of eating in the modern age that best mimics diets of our hunter-gatherer ancestors - combinations of lean meats, seafood, vegetables, fruits, and nuts. By eating the foods that we are genetically adapted to eat, followers of the Paleo Diet are naturally lean, have acne-free skin, improved athletic performance, and are experiencing relief from numerous metabolic-related and autoimmune diseases.


Learn how to lower your risk of cardiovascular disease, cancer, diabetes, obesity, osteoporosis, arthritis, acne, gastrointestinal disease, autoimmune diseases, and more. On recommended websites,  you’ll learn the latest science and practical scientific tips that will lead to optimum health and performance. This truly is the world’s healthiest diet.

The Paleolithic Diet ("Paleo" is a common abbreviation) is based on eating foods that our Paleolithic ancestors ate. The "Paleolithic" refers to the Paleolithic Age, which is a formal time period on Geologic Time Charts from about 2,500,000 years ago to about 10,000 years ago. The premise is that during the Paleolithic, we evolved a specific genome that has only changed 0.01 per cent in these last 10,000 years. However, during this recent time span mass agriculture, grains/grain products, sugars/sugar products, dairy/dairy products, and a plethora of processed foods have all been introduced as a regular part of the human diet. We are not eating the foods we are genetically and physiologically adapted to eat (99.9% of our genetic profile is still Paleolithic); and the discordance is an underlying cause for much of the "diseases of civilization", "syndrome X", obesity, and "diseases of old age" that are so epidemic in our society today.

As Dr. Cordain and others' scientific research reveal - the evolutionary, genetic, and clinical evidence point to a natural (i.e., unprocessed foods), omnivorous diet as the healthiest way to eat. Dr. Cordain's research shows that 70% of the average caloric intake of Americans is from foods that did not even exist for our Paleolithic ancestors. This discordance is having tremendously negative health consequences for our society as a whole.

Our genes determine our optimum diet, and our genes evolved according to the environments in which our ancient ancestors lived, including the foods they ate. Our Paleolithic ancestors did not eat just one single diet, but rather they ate within a range of natural, unprocessed diets - depending on variables like geography, climate, competition, ecologic niche, season, and glaciations. All of these Paleolithic diets did share some universal characteristics, though

Nutrition is the foundation for all athletic development and essential for achieving elite fitness and health. The CrossFit nutrition prescription in it's simplest terms is "Eat meat and vegetables, nuts and seeds, some fruit, little starch, and no sugar." This ensures that you are eating "real food," the food that our hunter-gatherer ancestors have eaten for millions of years, and avoiding the processed "edible food-like substances" that come in boxes, bags and packages.

Evolution has not kept pace with advances in agriculture and food processing resulting in a plague of health problems for modern man. Coronary heart disease, diabetes, cancer, osteoporosis, obesity and psychological dysfunction have all been scientifically linked to a diet too high in refined or processed carbohydrate. Many have observed that keeping your grocery cart to the perimeter of the grocery store while avoiding the aisles is a great way to improve health. Real food is perishable. The stuff with long shelf life is all suspect. An easy rule is "If you can hunt it or gather it, you can eat it."

If you follow these simple guidelines you will benefit from nearly all that can be achieved through nutrition.
Reclaim your health by understanding the diet that is genetically coded in all humans, the Paleo Diet.

We have a modern snap shot into the effects of the Paleo Diet with the last 84 tribes of Hunter Gatherers on earth. These Hunter Gatherer tribes have survived relatively untouched since the dawn of time; we know these groups are muscular, strong and healthy. They have perfect eyesight and straight teeth and are free from diabetes, obesity, cancer and other problems plaguing the modern world. Since we are genetically identical to our ancestors of 2 million years ago and for the last 7 million years we have been genetically coded to eat a certain way, a diet that is based on animal based proteins, fruits and vegetables and healthy fats is the key to health. A modern diet based on grains, processed foods and sugars has taken us down a path of sickness, illness and obesity.

What Foods Should I Avoid?
Anything that doesn't exist in nature, or has been processed. Corn, rice, bread, candy, potato, sweets, sodas, and most processed carbohydrates. Processing can include bleaching, baking, grinding, and refining. Processing of carbohydrates greatly increases their glycemic index, a measure of their propensity to elevate blood sugar.

What is the Deal With Hormones?
Hormones regulate how the body stores and releases fat. The hormonal response your body has to food determines whether you store fat or burn it. As far as hormones are concerned, food is a drug--a very powerful drug. Consuming low-glycemic foods, that keep insulin levels steady, will allow stored body fat to burned up as a fuel. On the other hand, high-glycemic foods (especially processed carbohydrates) spike insulin levels, raise blood sugar, and send a double wammy message to your body telling it to (1) store calories as fat and (2)block body fat from being used as fuel. The CrossFit prescription is a low-glycemic diet and consequently severely blunts the insulin response.

Caloric Restriction and Longevity
Current research strongly supports the link between caloric restriction and an increased life expectancy. The incidence of cancers and heart disease sharply decline with a diet that is carefully limited in controlling caloric intake. The CrossFit prescription is consistent with this research. The CrossFit prescription allows a reduced caloric intake and yet still provides ample nutrition for rigorous activity

Some interesting facts:
How many Americans suffer from Type 1 and Type 2 Diabetes?

Nearly 21 million Americans have diabetes, a group of serious diseases characterized by high blood glucose levels that result from defects in the body’s ability to produce and/or use insulin. Diabetes can lead to severely debilitating or fatal complications, such as heart disease, blindness, kidney disease, and amputations. It is the sixth leading cause of death in the United States. Type 2 diabetes, which accounts for 90% to 95% of all diagnosed cases of diabetes, involves insulin resistance – the body’s inability to properly use its own insulin. Type 2 used to occur mainly in adults who were overweight and ages 40 and older. Now, as more children and adolescents in the United States become overweight and inactive, type 2 diabetes is occurring more often in young people. (CDC)

How many American’s have cancer?
In 2005 over 10 million American’s were diagnosed with cancer (Cancer.Org) and 1,372,910 new cases diagnosed every year.

What is the leading killer of Americans?
Cancer is responsible for 570,280 deaths.

How many Americans are obese?
Obesity is out of control in the United States: 3.8 million people are over 300 pounds, over 400,000 people (mostly males) carry over 400 pounds and the average adult female weighs an unprecedented 163 pounds.

•Between 1962 and the year 2000, the number of obese Americans grew from 13% to an alarming 31% of the population.
•63% of Americans are overweight with a Body Mass Index (BMI) in excess of 25.0.
•31% are obese with a BMI in excess of 30.0.
•Childhood obesity in the United States has more than tripled in the past two decades.
•According to the U.S. Surgeon General report obesity is responsible for 300,000 deaths every year.

Sites worth checking out:
http://www.paleobrands.com/

http://www.robbwolf.com/
Posted by AMRAP Fitness at 9:27 AM