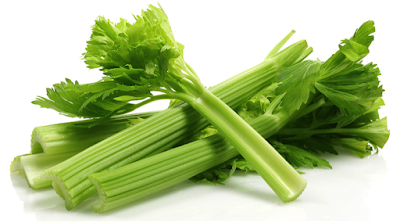 BENEFITS OF CELERY
By: Natalia Olifer

Celery is an extremely old vegetable, with records showing that celery leaves were part of the remains found in the tomb of pharaoh “King Tutankhamun,” who died in 1323 BC. In ancient Greece, celery leaves were used as garlands for the dead and to make wreaths or crowns that were given to winners of battles. Celery is even mentioned in Homer’s Iliad and The Odyssey; horses were said to grow on wild celery that grew throughout Troy.

In the past, celery was grown as a vegetable mostly during the winter and early spring months. People liked to eat celery to help with “cleansing” and believed that celery acted as a natural detox tonic that could prevent sickness. Celery seeds were also used to help relieve pain.
Celery, which has the scientific name Apium graveolens, is a vegetable in the plant family called Apiaceae. The benefits of celery begin with it being an excellent source of antioxidants and beneficial enzymes, in addition to vitamins and minerals such as vitamin K, vitamin C, potassium, folate and vitamin B6. 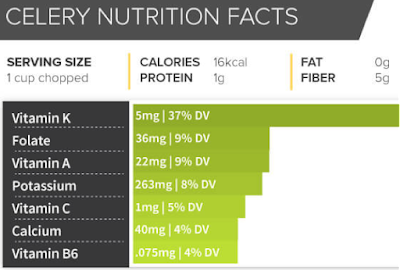 Top benefits of celery:
1. Helps Lower High Cholesterol
Eating celery every day may reduce artery-clogging cholesterol (called LDL or “bad” cholesterol). The phthalides in this herb also stimulate the secretion of bile juices, which work to reduce cholesterol levels. Less cholesterol means less plaque on the artery walls and a general improvement in heart health. The fiber that is found in it also works to scrape the cholesterol out of the bloodstream and eliminate it from the body with regular bowel movements, further boosting cardiovascular health.
2. Lowers Inflammation
Celery contains antioxidants and polysaccharides that are known to act as anti-inflammatories, especially flavonoid and polyphenol antioxidants. These support overall health, especially as someone ages, by fighting free-radical damage (or oxidative stress) that can lead to inflammation.
3. Weight Loss
Regular drinking of celery juice before meals may help reduce your weight. It is very low in calories and is also filling due to its high fiber content. Therefore, it can help reduce the tendency to overeat and help you keep the weight down without feeling hungry all the time!
4. Helps Prevent or Treat High Blood Pressure
Celery seed extracts have anti-hypertensive properties that help reduce high blood pressure, one of the important risk factors for coronary heart disease that is the largest cause of mortality in industrial countries. Benefits of celery seeds include potentially helping to control chronic elevated blood pressure levels. (3) The blood pressure-lowering benefits of celery come from its seeds, which contain hexanic, methanolic, and aqueous-ethanolic extracts that improve circulation, lower inflammation and help control blood pressure.
5. Helps Prevent Ulcers
A 2010 study published in the Journal of Pharmaceutical Biology found that celery contains a special type of ethanol extract that is useful in protecting the lining of the digestive tract from ulcers. Celery extract has the ability to significantly replenish depleted levels of gastric mucus that is needed in the stomach lining to prevent tiny holes and openings from forming.
Researchers believe celery nourishes the stomach, colon and intestines due to the presence of chemical constituents such as flavonoids, tannins, volatile oils and alkaloids that control the level of gastric acid released while also improving the level of protective mucus.
6. Detoxifies the Body
It acts as an antioxidant, and in truth, all parts of celery, including the seeds, roots, and leaves can be used. Eating this vegetable regularly helps to avoid diseases of the kidney, pancreas, liver, and gallbladder.
7. Prevents Urinary Tract Infections
Celery seeds help in the elimination of uric acid because it is commonly used for its diuretic properties, meaning that it stimulates urination. Therefore, it is good for people with bladder disorders, kidney problems, cystitis, and other similar conditions. The seeds also assist in preventing urinary tract infections in women.
8. Protects Liver Health
A diet high in celery, as well as chicory and barley, can be beneficial for people suffering from liver disease.
9. Contains Anti-Microbial Properties That Fight Infections
Celery seeds have actually been used for centuries as an herbal medicine with reported antibacterial effects. A 2009 report published in the Journal of Pharmacy and Pharmacology shows that celery contains special anti-microbial components found in the seeds of the celery plant. When extract was taken from celery seeds and combined with harmful bacteria compounds that cause infection in humans, the celery extract was able to significantly purify and reduce the bacteria’s growth, suggesting celery can be used to naturally boost immunity and fight bacterial infections.
10. May Help Protect from Cancer
Another one of the important benefits of celery? It’s in the same plant family as cancer-protective vegetables like carrots, celery, fennel, parsley and parsnips, which all contain chemo-protective compounds called polyacetylenes. Early studies have shown that polyacetylenes help reduce toxicity and fight against cancer formation, specifically breast cancer, intestinal cancer and leukemia.
11. Lowers Arthritis Pain
Celery is great for people suffering from arthritis, rheumatism, and gout. It has anti-inflammatory properties that help reduce swelling and pain around the joints. Its sticks also act as a diuretic, which helps remove uric acid crystals that build up around the body’s joints that can add to the pain and discomfort. It can also increase the regrowth of tissue in inflamed joints.
12. Reduces Asthma Symptoms
Vitamin C present in celery prevents free radical damage and also has anti-inflammatory properties that lessen the severity of inflammatory conditions like asthma.
13. Relieves Migraines
The presence of coumarins in celery can provide relief from migraines. The exact mechanism isn’t completely understood, but research points to a suppression of nitric oxide release in the brain, which can causeheadaches and migraines.
14. Treats Rheumatism
Celery extracts, which contain 85% 3-n-butylphthalide (3nB), are effective in treating arthritis and muscular pains.
15. Controls Diabetes
Celery leaves are also eaten for treating various diabetic conditions. This is because of their high fiber content, which has been shown to help manage diabetic symptoms.
16. Prevents Cataracts
Dripping celery tea drops on eyelids is good for certain ophthalmological conditions and can improve your eye health, reduce your chances of developing cataracts, and protect you against macular degeneration.
17. Nerve Tonic
Celery contains high calcium and due to this, it is commonly used to calm the nerves.

Risks of eating celery
Celery belongs to a small group of foods that can cause a severe allergic reaction, and this can lead to fatal anaphylactic shock. Those who are allergic to the celery should be cautious and check food labels, as even small traces of celery can cause a reaction.Celery also has a relatively high sodium content, at 35 milligrams per stalk. However, this is very little compared with the 1,500 milligrams a day recommended by the American Heart Association, and far less than the 3,400 milligrams a day consumed by most Americans. It is still a low-sodium food. The seeds of this vegetable contain volatile oils, flavonoids, coumarins and linoleic acid, and are therefore not good for pregnant women because they may cause contractions in the uterus. Other than that, eat as many of those crunchy, green, and healthy stalks as you can!

Posted by AMRAP Fitness at 4:39 AM