Reduced Eccentric Loading of the Knee with the Pose Running Method 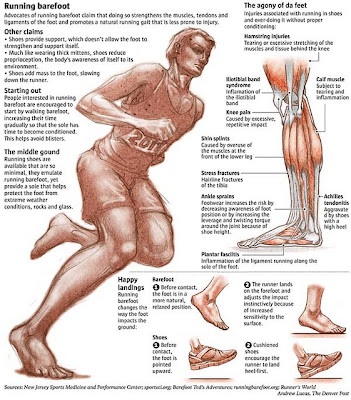 
Methods: Twenty heel-toe runners were instructed in midfoot running and a novel running style in which the acromium, greater trochanter, and lateral malleolus are aligned in stance (Pose running). Clinical gait analysis was performed for each running style and the biomechanical variables compared.

Conclusions: Pose running was associated with shorter stride lengths, smaller vertical oscillations of the sacrum and left heel markers, a neutral ankle joint at initial contact, and lower eccentric work and power absorption at the knee than occurred in either midfoot or heel-toe running. The possibility that such gait differences could be associated with different types and frequencies of running injuries should be evaluated in controlled clinical trails.
Running style is described as a learned response to a given set of anthropometric and physiological constraints (4) so that the movement of the body components minimizes the amount of mechanical work performed (1). Running style may be described by the overall action, body angle, arm swing, foot placement, rear leg lift, and length of stride (19).


Running in the forward direction with similar flexed knee geometry and midfoot contact to that of backward running may be hypothesized to offer equivalent treatment benefits. Midfoot running is, however, not associated with a lower risk of injury (3). Although the stance phase knee geometry of midfoot running is not described, it appears that foot contact is unlikely to be the exclusive determinant of the risk of injury.


Accordingly, the aims of this study were to determine whether clinical gait analysis can distinguish between midfoot and Pose running in natural heel-toe recreational runners and whether the Pose method produces biomechanical changes that might be of value in the treatment or prevention of running injuries.
Posted by AMRAP Fitness at 7:21 AM