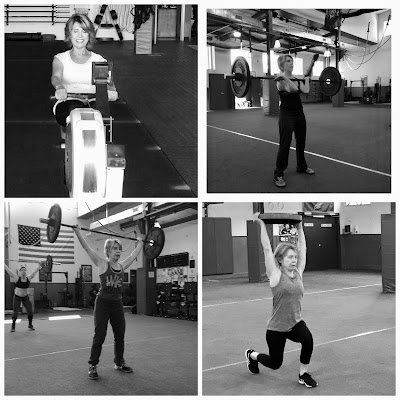 Most people wouldn’t put “grandmother” and “Crossfit” in the same sentence. Of course, I’m not a stereotypical grandma.  I’m a fit, energetic, healthy woman who lifts barbells, does pull-ups, swings kettlebells, and so much more.

Four years ago, I was heading down a different, far less healthy path.  I was 65 years old and had been diagnosed with osteoporosis.  My doctor wanted me to take medication, but I was concerned about the side effects.  Plus, I didn’t want to be someone who needed to take 10 different pills every time I sat down for a meal.  Before trying medication, I wanted to find a different route towards managing my osteoporosis.

My son-in-law, Ray Traitz, and my daughter, Suzanne ran a Crossfit gym and suggested I start training with them. At first, I was a bit reluctant. I had always been active, for example walking and using some lighter weights, but I’d never tried anything like Crossfit.  However, my daughter convinced me to give it a try.

The workouts were challenging, to say the least.  However, Ray and Suzanne were amazing coaches.  They pushed and motivated me, but they also made sure I completed each workout safely.  Over time, I found myself developing better endurance, lifting heavier weights, and performing many exercises I never thought I could do.  I made real, noticeable progress. I felt fitter and stronger.

The nutrition piece was hard for me. My son-in-law was constantly bugging me to change my eating habits. I decided to give in and saw tremendous results in my performance and body composition. I never knew how much of an impact nutrition was until I finally committed to change. This took me to the next level of fitness.
And guess what? Two years after starting training, my next bone density scan showed nothing short of a miracle.  I had expected to maybe stop the progression, but my osteoporosis completely reversed. My bone density had actually improved. Two years later, the results were even better.

I will be 70 years old in February, married 50 years to a man who totally supports my efforts.  I have three great kids, son-in-law, and four amazing grandchildren, and I am stronger than I was 30 years ago.
One of my biggest fears was not being able to keep up with my grandkids and becoming feeble. However, thanks to Coach Ray & Suzanne, I’ve overcome that fear. Physically, I feel like the person I want to be and mentally a person a never thought I could become.

I know this sounds cliché, but the phrase, “age is only a number,” is absolutely true. My age doesn’t define who I am, and I have my hard work and efforts to thank.