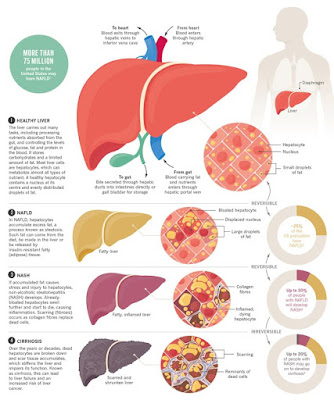 
(Reuters Health) - Nonalcoholic fatty liver disease and its more aggressive form, nonalcoholic steatohepatitis, have become the fastest-growing reasons for liver transplants in young Americans, according to a recent study.

Typically, older adults experience the slow progression of fatty liver disease that is not related to alcohol but can lead ultimately to liver cirrhosis. Due to increasing childhood obesity, hypertension and diabetes, however, more young adults are reaching end-stage liver disease early in life, researchers say.

“I see kids at ages 7 and 8 with this problem, and one of my youngest patients developed cirrhosis at 13,” said senior study author Dr. Naim Alkhouri, who directs the metabolic program at the Texas Liver Institute in San Antonio, Texas.

“In Texas in particular, nonalcoholic steatohepatitis is the No. 1 indicator for transplants in adults,” he told Reuters Health in a phone interview. “It now affects 1 in 3 adults and 1 in 10 children.”

Alkhouri and colleagues analyzed nationwide data from the United Network for Organ Sharing on liver transplants in young adults between 2002 and 2012 to examine the reasons they needed a transplant.

During those years, there were a total of 5,157 transplants in people ages 18 to 40, of whom 23% were obese, the researchers found. The top reason for transplant, accounting for 25%, was autoimmune/cholestatic liver disease, which includes conditions such as bile duct infections, immune system-related hepatitis, hereditary bile duct problems and drug-related liver damage.

About 18% of transplants were for acute liver failure, and other important causes were hepatitis C and B as well as liver cancers. Nonalcoholic steatohepatitis, also called NASH, accounted for just 3.3% of transplants across the entire study period, but it was the fastest-growing reason for transplant.

The number of liver transplants performed for NASH increased from 0.53% in 2002 to 4.46% in 2012, a nine-fold jump, the study team reports in Journal of Clinical Gastroenterology, online September 28.

Survival rates were similar among NASH and non-NASH liver recipients, but graft survival was lower and re-transplantation rates were higher in NASH recipients, the researchers note.


“Following the childhood obesity explosion in the ‘80s and ‘90s, we’re seeing young adults with old bodies,” Alkhouri said. “Although they’re 30, their organs are sick.”

Fatty liver disease and NASH can often go unrecognized and untreated in young adults since pediatricians and primary care doctors don’t look for signs of the disease in younger people, the study authors write.

New studies are investigating ways to treat fatty liver disease early in life and prevent it from reoccurring after transplantation, Alkhouri said. Although the Federal Drug Administration doesn’t currently approve medication for NASH, phase 3 clinical trials underway now could lead to approved medication in a few years, he added.

“The other looming question is about fatty liver disease developing into liver cancer,” said Dr. Robert Wong of Highland Hospital in Oakland, California, and University of California, San Francisco, who wasn’t involved in the study.

“In medical school, we’re taught that cirrhosis is a prerequisite for cancer, but we’re seeing more reports that fatty liver can develop into cancer with little cirrhosis,” he told Reuters Health by phone. “If our only indicator to screen for cancer is to look for cirrhosis, that’s scary. We’re not going to look for it or find it.”

Liver specialists still don’t know why fatty liver disease and NASH develop so rapidly, Wong added. Factors could include differences in metabolism, demographics and lifestyle, which researchers are still trying to pinpoint so they can better diagnose patients in the future.


“The best treatment is still prevention,” Wong said. “If we can ID it early and then focus on blood pressure, diabetes, weight loss and a healthy lifestyle, we can better help patients with fatty liver disease.”

Posted by AMRAP Fitness at 6:38 AM